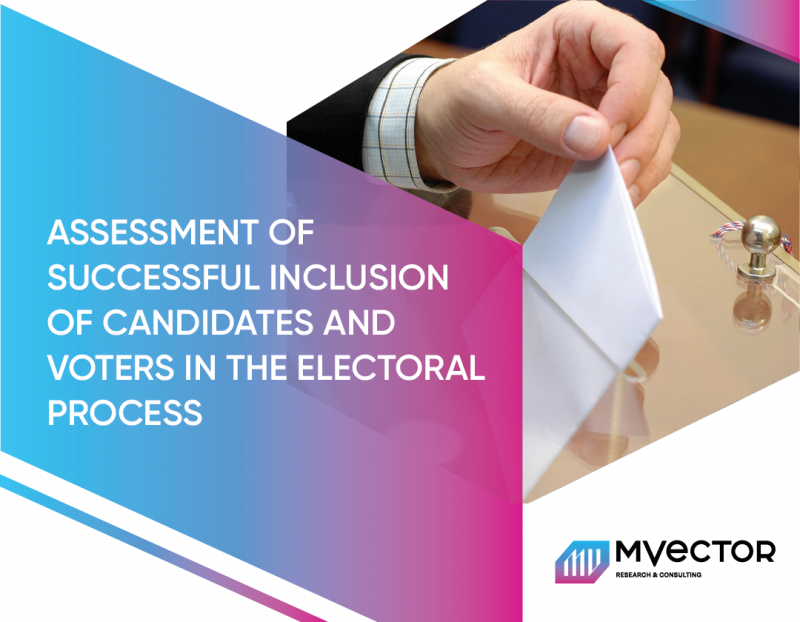 The M-Vector Team, supported by UNDP, has implemented the study on "Lessons Learned and Experiences of Vulnerable Groups in Electoral Processes".

The study is being conducted within the Program for the Support of Parliamentary Elections in the Kyrgyz Republic, implemented by the United Nations Development Programme (UNDP). The purpose of this Program is to support the efforts of the Kyrgyz Republic to improve the efficiency, transparency, and inclusiveness of electoral processes.

The study was initiated to examine a number of gaps existing in current electoral practice identified after implementing the pilot study. The pilot project was carried out by M-Vector at the request of UNDP in November 2021.  To make an in-depth observation of the learned lessons, the project conducted a qualitative study that revealed the experience of voters and candidates participating in the 2021 elections to the Jogorku Kenesh and local keneshes of the country.

The aim of the study is to assess the extent to which candidates and voters are successfully included in the electoral process; the barriers and lessons learned from the experience of vulnerable groups during the parliamentary elections held in November 2021; and the local elections conducted in April 2021.

The study included 10 focus group discussions (FGDs). In total, 95 respondents from 31 remote areas from all regions of the country were representing the following vulnerable groups in the discussion:

Two FGDs were held with each target group. The first one was supposed to bring together participants from the northern regions, the second one from the southern regions of the country. In each FGD, both voters and candidates who ran in the last elections to the Jogorku Kenesh and local keneshs of the Kyrgyz Republic participated in approximately equal proportions (with the exception of FGD with migrants).

Besides, the project ensured the representativeness of diverse political parties, self-nominees, and women participants (approximately 40%) among candidates in each target group.

The results of the study will be used by UNDP and its partners to improve the electoral system in Kyrgyzstan and the inclusivity of vulnerable groups in the electoral process.

The results of the study can be found by the links: